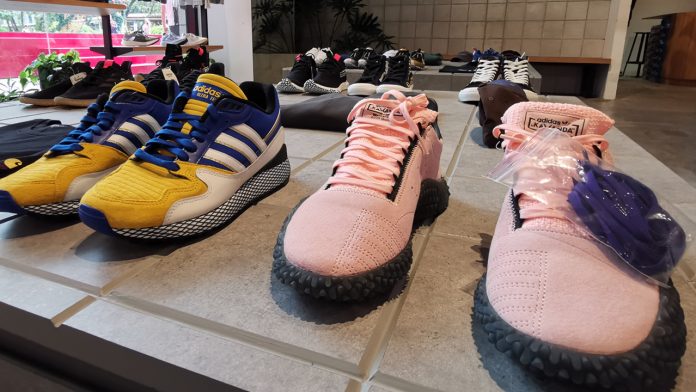 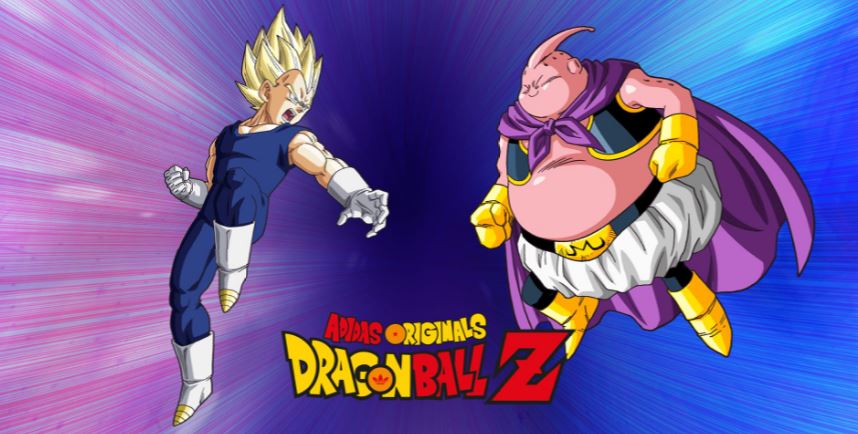 Admittedly, the hype of Dragon Ball Z x Adidas died down significantly after the first pack was released. Until now the ZX 500 RM Goku and the Yung-1 Frieza are the most sought after and the one with the (relatively) higher resale value.

We expected the Cell and the Gohan to underperform despite the awesome (and somewhat underrated) design narrative of the Gohan Deerupt due to the silhouette chosen. The Prophere and the Deerupt are two of the most divisive silhouettes that Adidas launched this 2018. 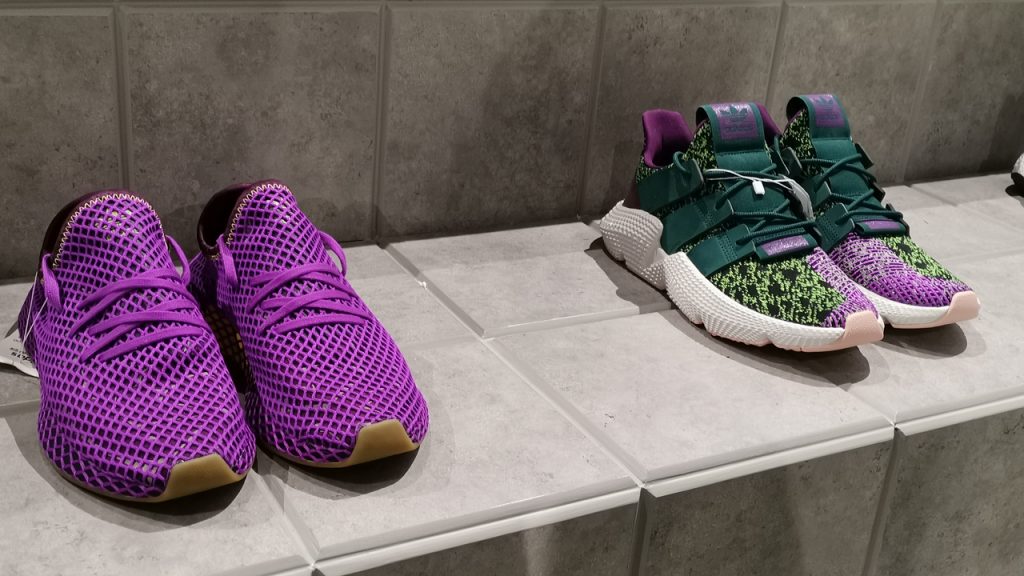 But when you see the Vegeta and Majin Buu sit on stores weeks after the launch, it’s somewhat heartbreaking considering the silhouettes are somewhat much more widely accepted than the last pack.

First off let’s check out the Prince of Saiyan himself, Vegeta. Probably one of my most favorite characters in Dragon Ball Z series, the Adidas collab decied to employ one of their retro silhouette to fit Vegeta, the Adidas Ultratech. 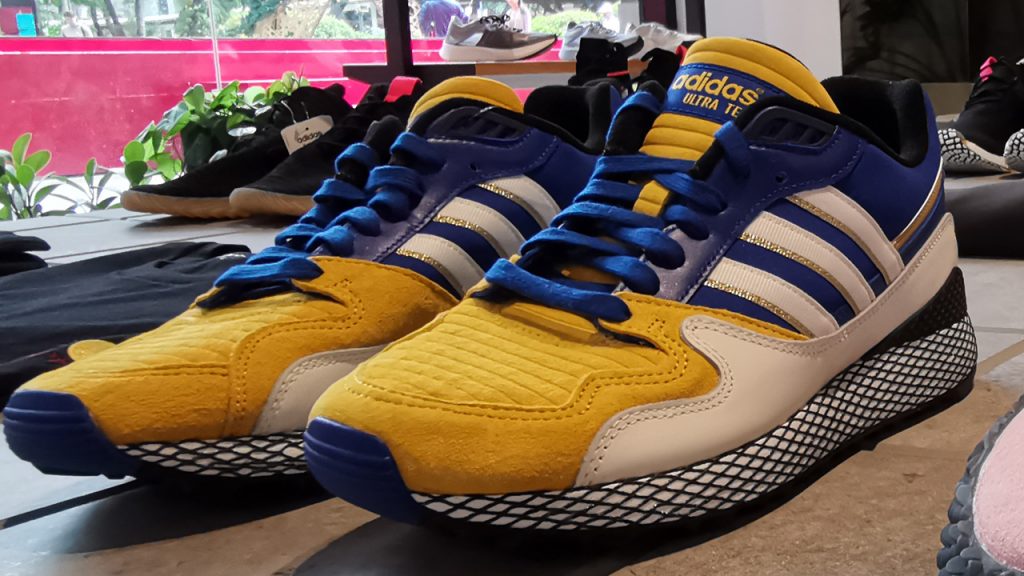 The shoe comes with the usual packaging of the Dragon Ball Z x Adidas collab with an image of the character on one side panel and an action shot in another. If you’ve seen our previous article, you know that the design is meant to be stacked amongst each other to create one long vertical poster of all the characters. 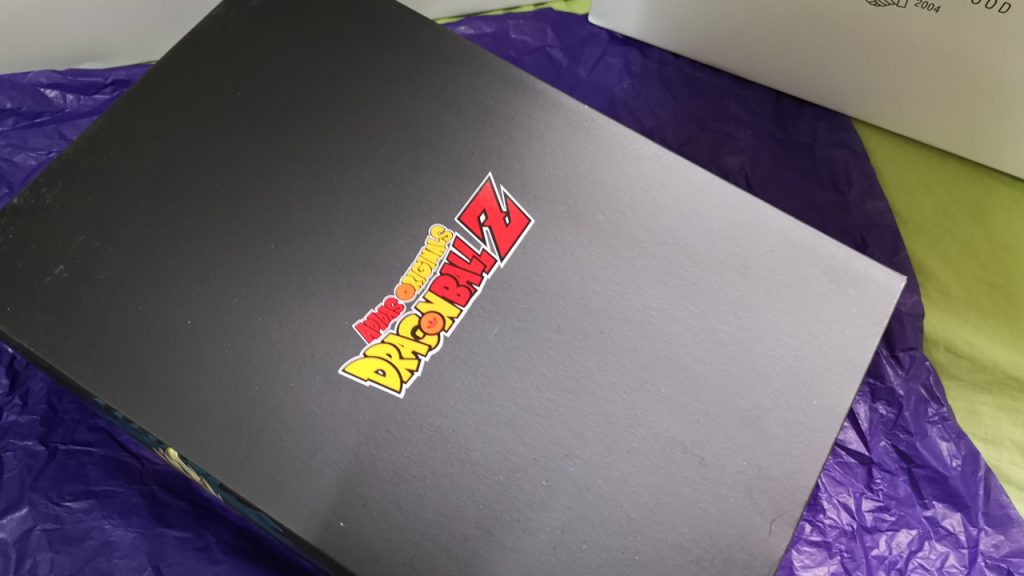 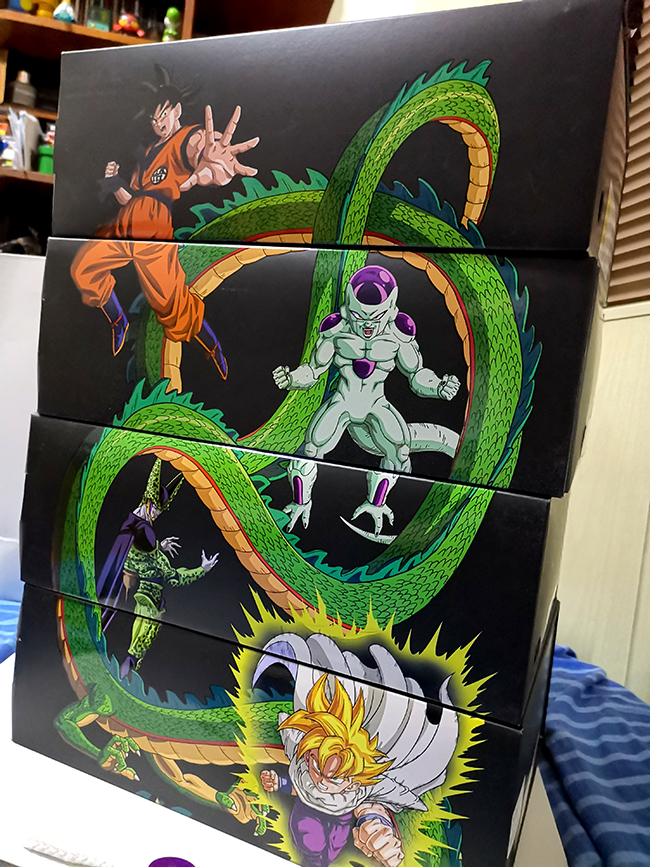 Inside, the shoe comes with a printed paper wrapping (that can serve as poster if you so wish to do so) with Vegeta hashing it out with our the devilishly fluffy Majin Buu. :3 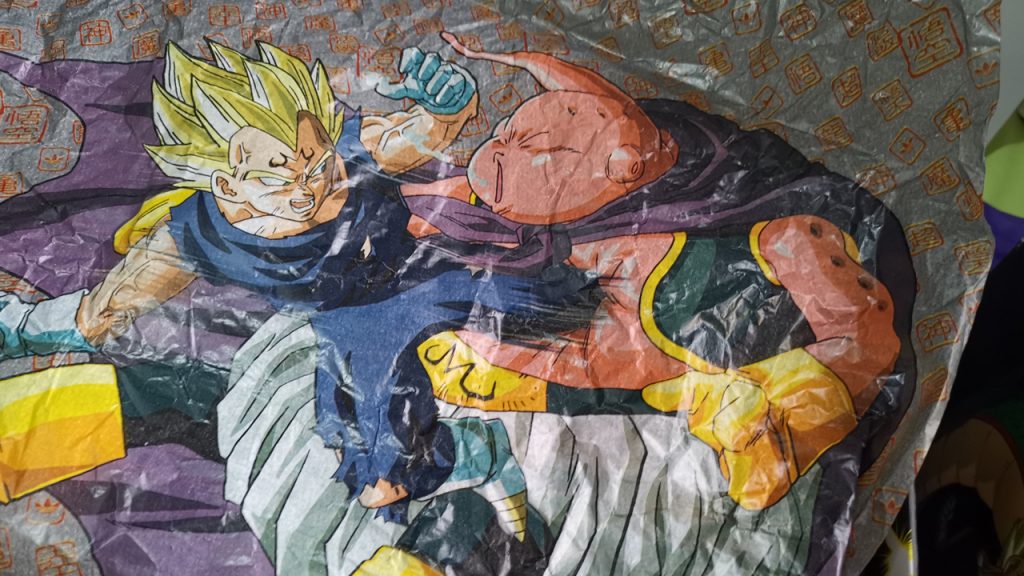 The shoe itself instantly showcases design elements of the character. Color-wise it harkens on Vegeta’s Saiyan armor during his first appearance. In fact, a lot of designs from the shoe factors that in. From the yellow suede toe box, the overall blue and white colorway to the markings at the heel. The shoe also comes with an extra pair of laces. 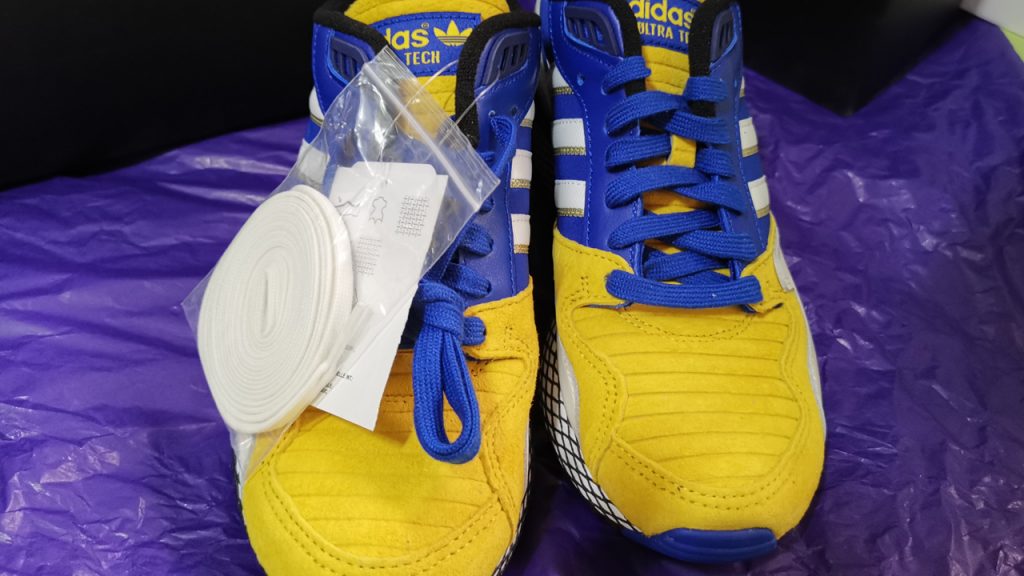 Then we go to the heel part where we’re greeted with a ridiculously loud statement: 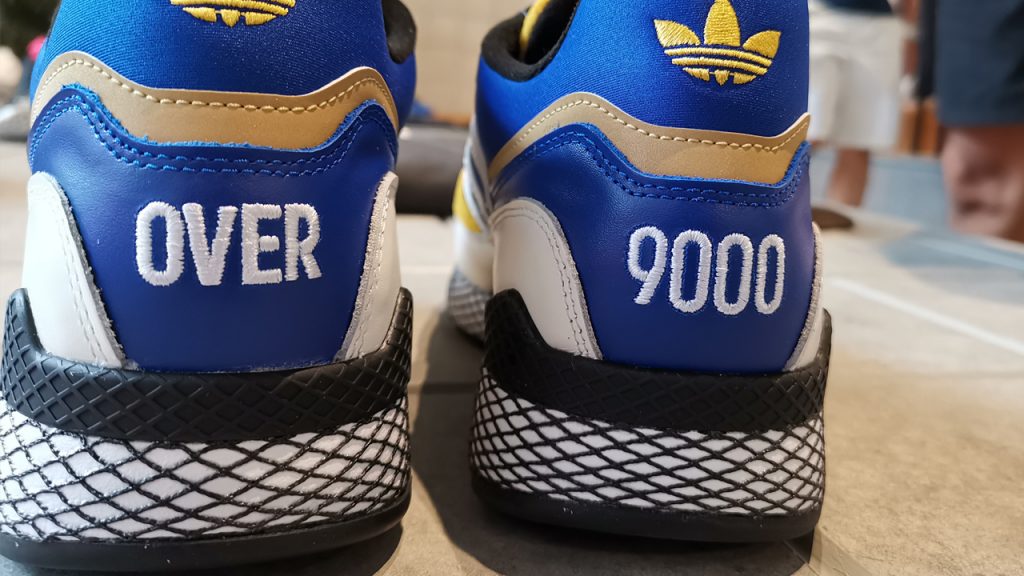 While I’m happy that a meme got through the actual design element of the shoe, I’m kinda bummed out that they didn’t go with the initial design decision to use the Capsule Corp logo (a tech brand for which Bulma—Vegata’s would be wife—owns).  Personally the “Over 9000” phrase just takes out the overall supposed prestige of the shoe.

The shoe then finishes with some questionable black net markings from the midsole and rounds everything with a black outsole.

As with all the Dragon Ball Z x Adidas Collabs, the insole comes with a special designed print to add to the anime flavor of the collection. Inside the tongue tab, you’ll see the print of a Dragon Ball with 5 stars, indicating that Vegeta is 5th in the collection. (To those who do not know the lore, the idea is to collect all 7 Dragon Ball as to summon Shenron and get your wish granted) 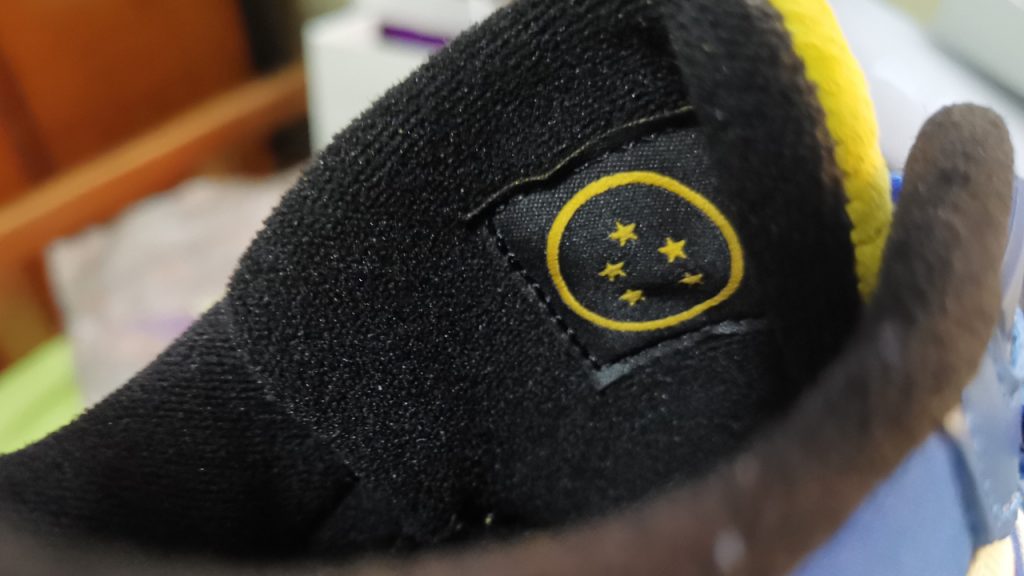 Fit-wise these retro sneakers run a bit big. I suggest going half a size down even if you have wide feet. If you have narrower feet, you might want to go a complete size down.

Overall the Vegeta is probably my 2nd most favorite sneaker from the collection. It should have edged out Goku (which is my number 1) but because the Over 9000 mark made it look a bit tacky for me. Still, I’d wear it with my Capsule Corp Jacket and the Korin Cap I got from New Era (which makes for a good casual cosplay set). 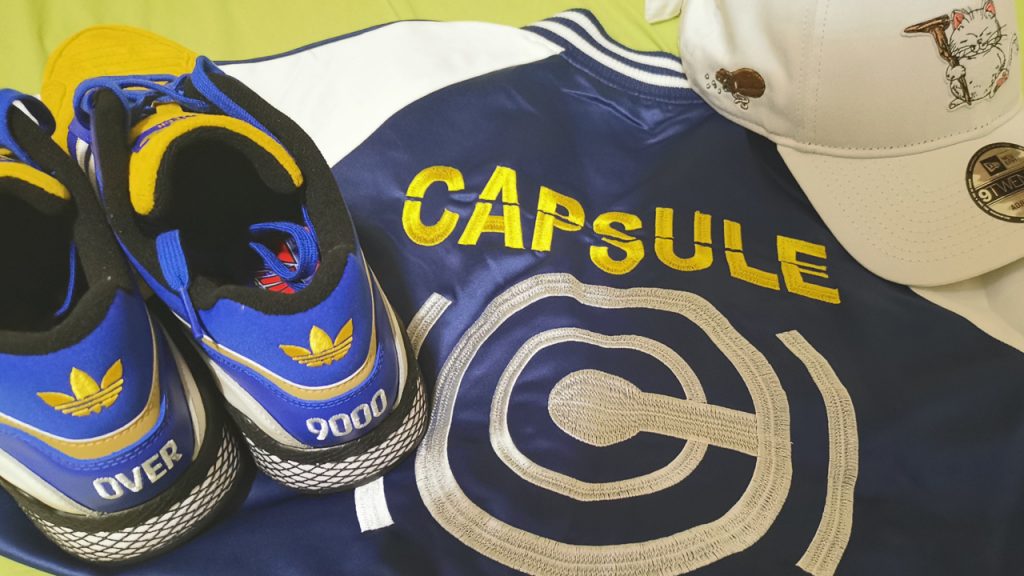 It’s not so Pink as you think! Majin Buu – Adidas Kamanda

Belonging to the triumvirate of divisive new silhouette sneakers from Adidas, Kamada still hasn’t gained the positive traction that Adidas may have wanted. A shoe that takes its inspiration from the good ol’ soccer days, Kamada has a weird organic-looking midsole that could creep some people out (it looks like scales from a Pangolin – a scaled anteater). 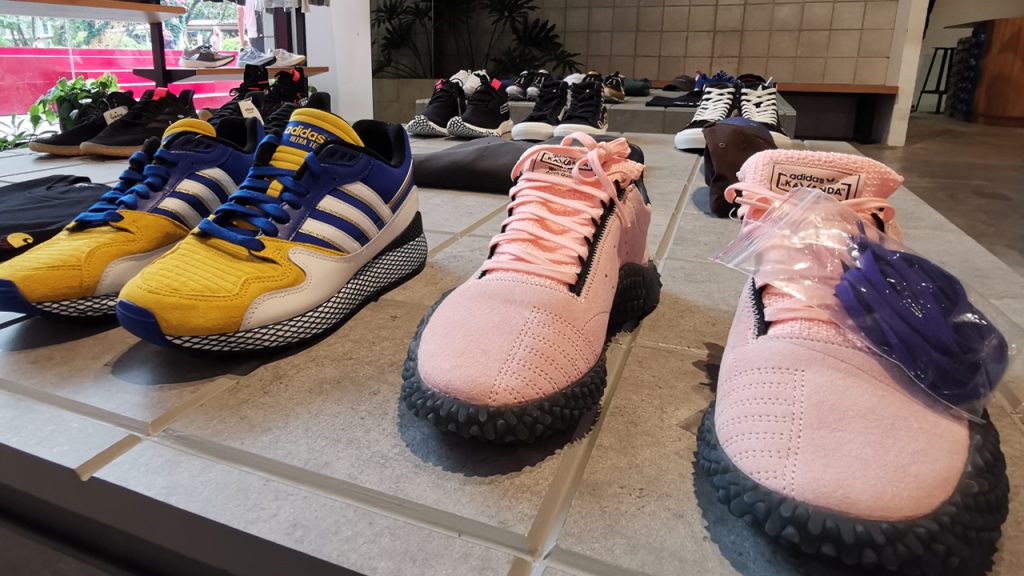 Maybe that’s the reason why they chose this for Majin Buu given that one of his powersets is the ability to absorb organic matter. Whatever the case may be, the Majin Buu Kamanda, from a design perspective seems to work.

As always, the shoe comes in a standard Dragon Ball Z x Adidas premium cardboard box with character designs on both sides. If you stack the Vegeta and Majin Buu box together, they form part of the conjoined long poster such as this: 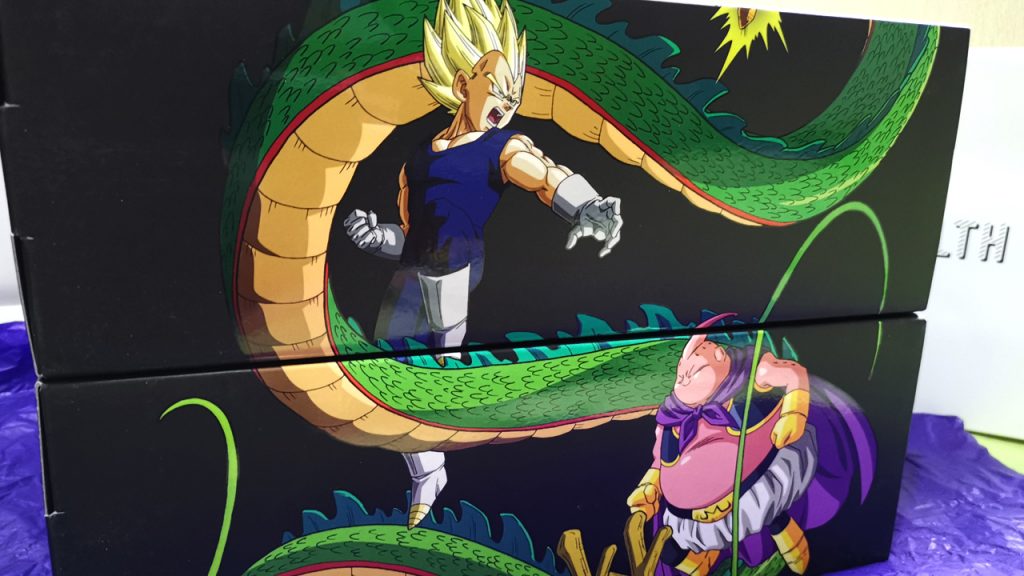 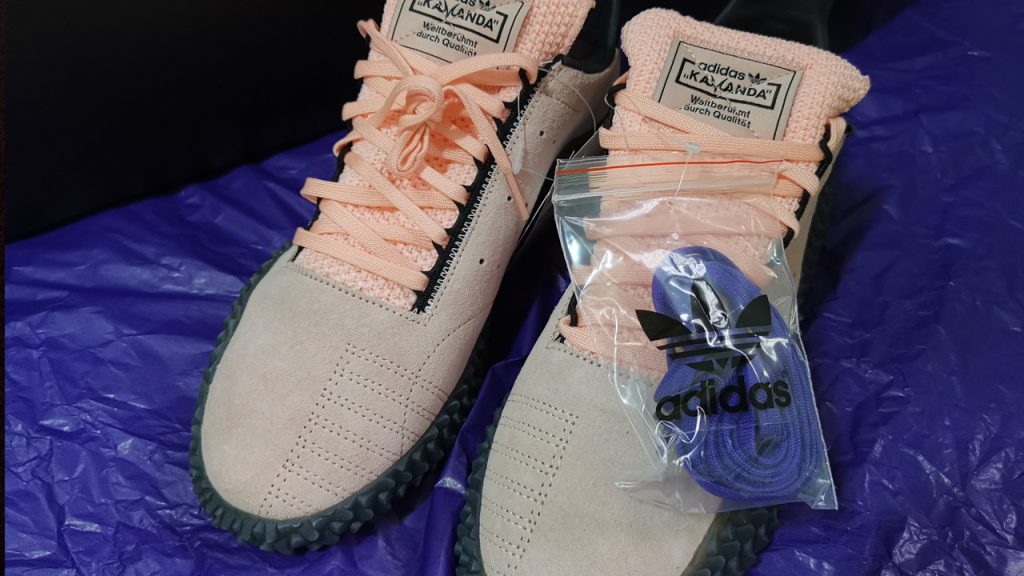 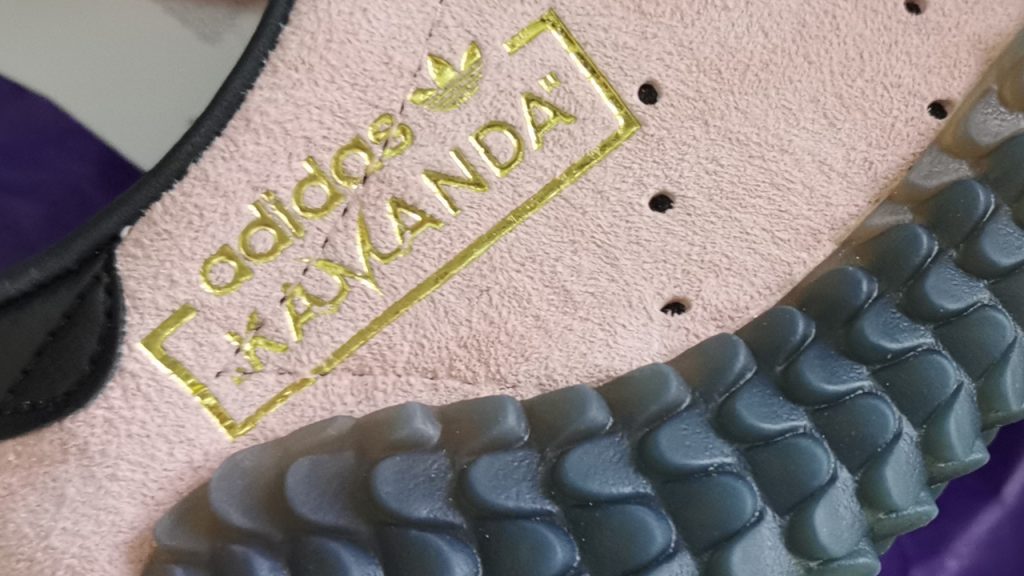 Under the mesh tongue tab (a design that I’m not particularly fond of with the Kamanda), we find a huge “Mr. Satan” text written across it. A nod to Buu’s relationship with Dragon Ball Z’s cookiest character Mr. Satan aka Master Pogi.

Towards the heel, the M is shown once again but this time with a stark yellow background, a nod to Majin Buu’s belt. 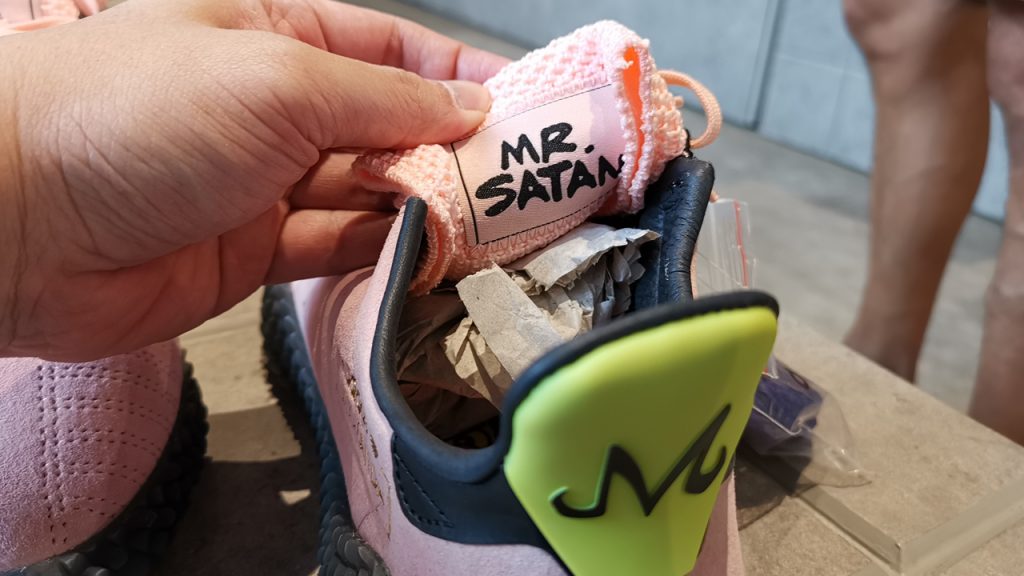 If you flip the shoe over, the Japanese name of Majin Buu is written on both shoes (Majin on one and Buu on the other). There’s also a very subtle Dragon Ball symbol on the medial side of the midsole with the six stars symbolizing that the shoe is 6th in the series. 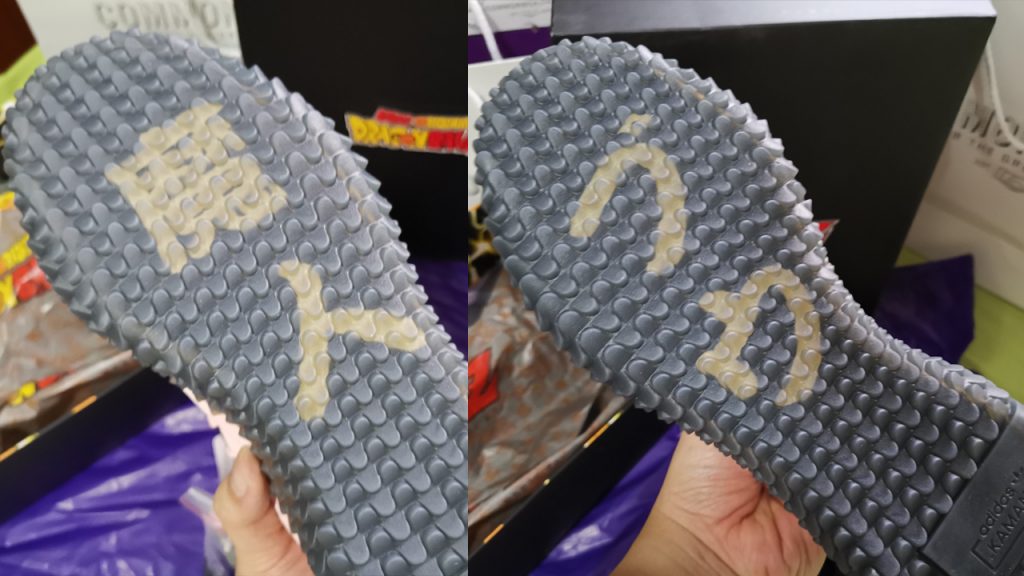 What I love about the Majin Buu Kamanda is its inclusion of an extra lace with a blue-purple color similar to that of the character’s cape.

As for fit, while not a retro sneaker, the Kamanda does run a bit long so you may want to go half a size down. Upon checking at Commonwealth PH, where we originally bought the sneakers when it dropped last November 24, 2018, there were a couple of Kamandas left. So, if you’re in the market for that, we suggest heading over to their newly opened Rockwell branch as soon as possible!