CONQuest Festival 2022 – How was the VTuber experience?

CONQuest Festival's VTuber panel was unexpected, and quite a lot of fun! 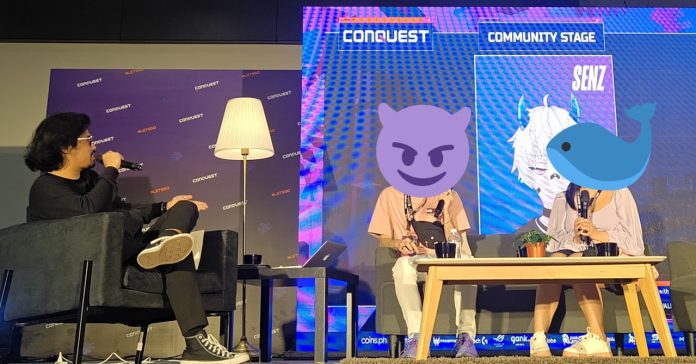 The Virtual YouTube (VTuber) industry was still green and growing back in the day, so no one seemed to expect this niche interest would suddenly boom in popularity over the past two years.

With the increase in interest, it also appears that VTubers’ appearances at many conventions are becoming more common, with booths dedicated to both local and overseas VTubers popping up at events. One such event is the recent CONQuest Festival 2022 which invited two special guests — Bao the Whale and the Pre-Debuting Vtuber Senz that surprised many fans who attended the event.

Now, we’ll talk about how the CONQuest Festival 2022 VTuber meet and greet managed to subvert the expectations of many people. We’ll also answer the question of if they delivered a good experience to the community that was worth the ticket price.

*I’ll refer to both VTubers in their VTubers persona for writing sake despite making an IRL appearance on stage.

First, let’s look back at past events back. At Cosplay Mania 2019, Mirai Akari was invited to make an appearance live on stage, being one of the earliest VTuber in the industry (along with Kizuna Ai and Kaguya Luna). Mirai Akari is considered to be one of the pioneers of the VTubing industry. Not only it was fun seeing a virtual idol like her live on stage and respond to live questions on stage, but the hype of people was also big enough that her goods were already gone before I could even secure my own copy.

Though, if I were to compare the feeling of this meet and greet in general, it was like watching a Hatsune Miku concert live on stage, but minus the fancy hologram and replaced with a huge screen where Mirai Akari appeared. This makes sense since she is indeed a VTuber, and like with other VTubers, the identity behind the VTuber persona must remain anonymous.

Let's all give a warm welcome to @baovtuber & @SenzVtuber here at the CONQuest Festival Community Stage 🔥#LetsGo to #CQ2022 🌴 pic.twitter.com/iXLTFNGI3Q

Though I was surprised to find out that the two talents appeared in the event as themselves (IRL as the people would say), which got many excited. To be fair, Bao did tweet about landing in Manila, but I just thought she was in character when she made the tweet, so I never imagined that they would “actually” be here. In fact, I even thought that CONQuest will do something similar to what VShojo did in Anime Expo 2022 (AX 2022) where they set up a dedicated booth with a single screen where the VTuber is supposed to appear and interact with fans. But what we got was something similar to what Kson did in AX 2022.

Anyway, Bao and Senz’s “in real life” appearance on the community panel was fun and it become more engaging for the fans. It was nice to see how the talents were willing to engage with the community antics and answer some questionable stuff like if a whale could bark (not the exact question) or what Tagalog words she learned.

Seeing these talents live on stage as themselves enlightened us that many VTubers like Bao can be more than just their virtual personas. And perhaps the biggest highlight of the IRL panel brought was the fan interactions; it was definitely a fun time.

After discussing it with some friends who attended, I think the whole community panel had a great impact because of how willing Bao and Senz were to engage with the fans. It didn’t feel that they were forcing themselves, and they were pretty sweet with their interactions. After all, they won’t fly from the US to the Philippines just to have a grand zoom meeting in their hotel room, right?

Being in person at an event surrounded by fans just hits differently. Let’s look back at Kson on AX 2022 where she appeared on stage cosplaying as her VTuber persona. I know that this is not going to be the standard for every VTuber meet and greet, but a virtual talent attending in person can make for a more “live” and engaging experience.

Of course, fans should also be respectful of the talent if they do appear IRL, with Bao requesting the fans to edit their selfies with her if they want to share them on their social media. Her message was clear and thankfully, a lot of people did comply.

In summary, was it a huge surprise? Yes, it was quite unexpected that the two VTubers would be here in person.

Was it boring? Nope, everyone had a blast the MC did his best to make it fun.

Are we looking forward to more VTuber meet and greets? Definitely! Whether it’s IRL or a virtual meet, either option is still fun and I’m sure fans will have a good time as well.