The PC version of Miles Morales is definitely worth picking up if you enjoyed Spider-Man Remastered. 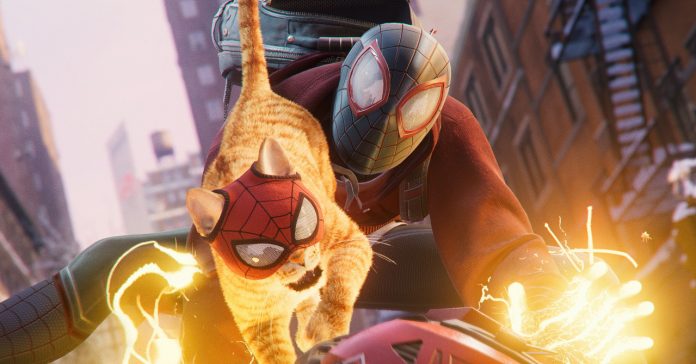 A few months ago, I replayed Marvel’s Spider-Man for another time, but that was for the PC version of the game. Now, I’m back in the world of web-slinging hero, but this time as Miles Morales.

Back in late 2020, I played Marvel’s Spider-Man: Miles Morales, the follow-up (but not exactly the sequel) to the PS4 Spider-Man. While many were able to play the game on PS5, I only got to play the game’s PS4 version as the PS5’s Philippine release was delayed by a month.

Now though, I’ve been replaying Miles Morales, this time on PC. Given that I played the game on PS4, not to mention that I didn’t replay its PS5 version, I had high expectations for this version. 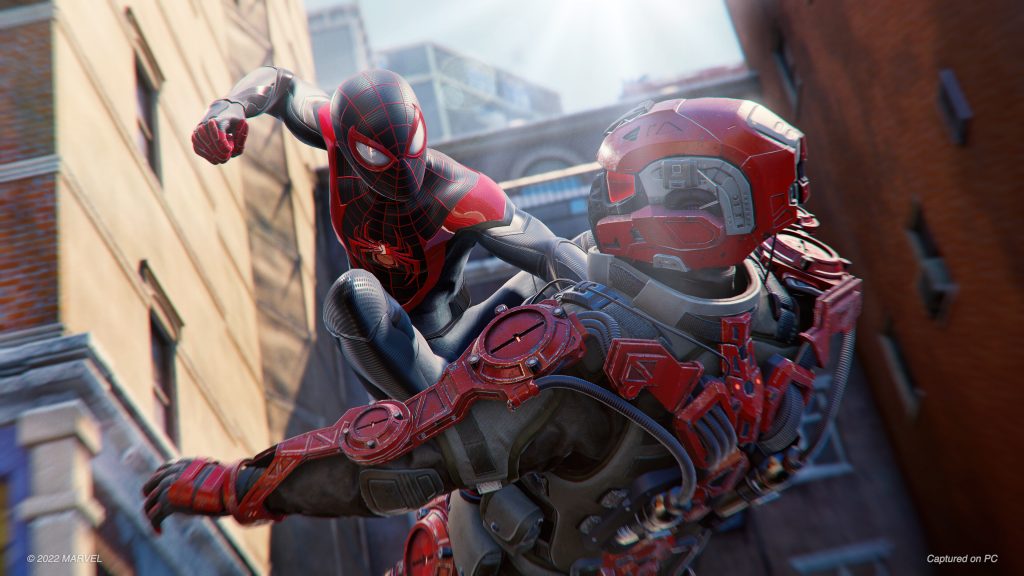 Thankfully, my expectations were met, and I enjoyed returning to Miles Morales!

[NOTE: This will be a fairly short review as I won’t dive deep into the technical performance and my detailed thoughts on the gameplay and story. This is because I covered performance in my previous Spider-Man Remastered PC review, while the gameplay/story was covered extensively in my original Miles Morales review.] 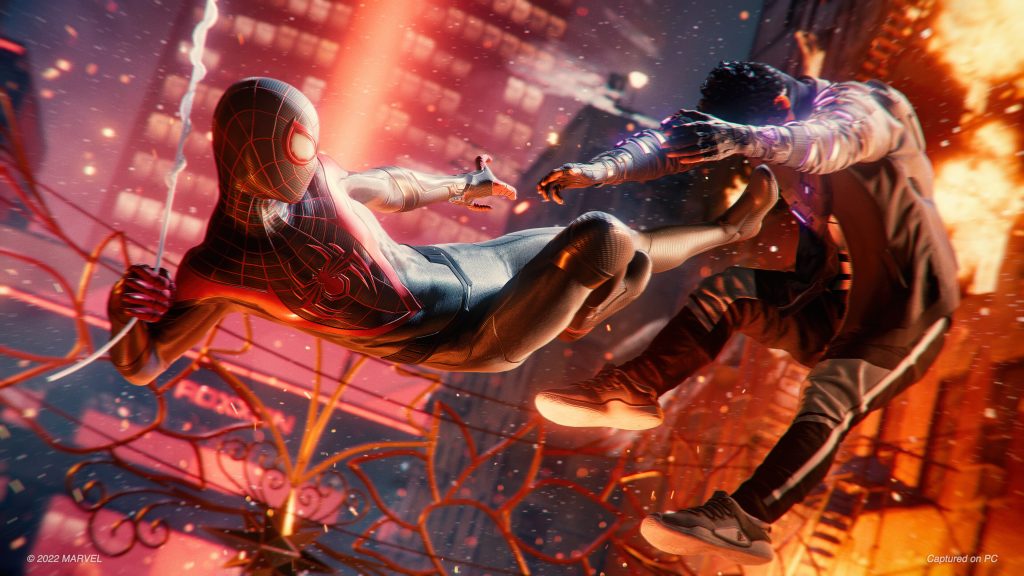 When I played Miles Morales on the PS4 (a PS4 Slim to be specific), the game ran smoothly, and I didn’t run into any gamebreaking bugs. While there were times that the framerate dipped (owing to the near decade-old hardware), Miles Morales was still a good experience on the previous gen Sony console.

While I didn’t play the PS5 version (so I can’t compare), it’s fair to say that, based on my time with the game, Miles Morales on PC is the definitive way to play the game. At least, if you have a controller.

As with Spider-Man Remastered, Miles Morales has a lot of PC-specific features, including NVIDIA DLSS support for a smooth framerate even at higher resolutions (if you have an RTX NVIDIA card that is). It also features ultra-wide monitor support, ray-traced reflections and shadows, and customizable controls, among others. 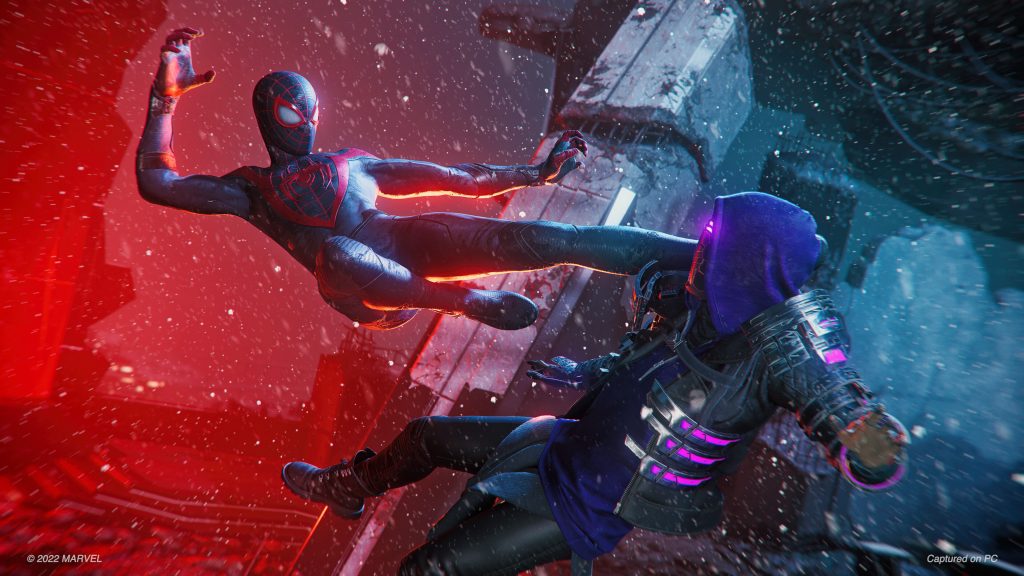 If you have a beefy PC, Miles Morales is a pretty game. For instance, if you have an RTX 3080 and Intel Core i7 combo that we tried, the game can run easily at 4K and at well above 60FPS. This makes it even better than the PS5 version if you have a powerful enough PC to run it.

Meanwhile, if you don’t have an extra powerful rig, Miles Morales should be optimized well much like the main Spider-Man game on PC. Though in my case, when I tried playing it on an older laptop with Ryzen 7 3700U and a GTX 1650 GPU, the game was stuck on a black screen. This was unexpected given the same laptop was able to play Spider-Man Remastered.

Because of this, if you have an older gaming laptop or an underpowered PC, you might run into some issues like I did. Though this might just be an isolated case.

Gameplay and Story Still Hold Up 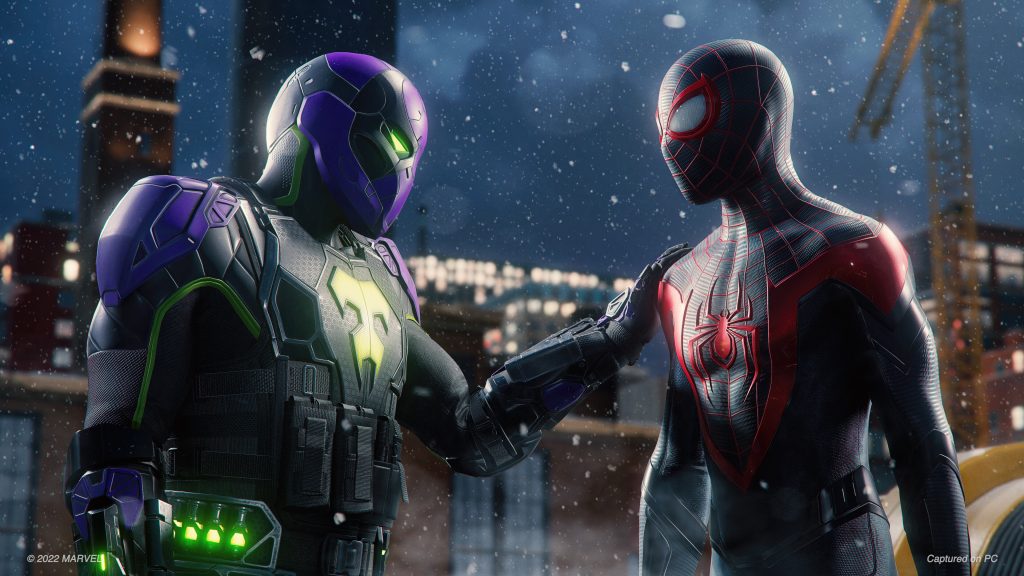 As for the game itself, I had fun revisiting Miles Morales. After getting to play it again, I can say that it still definitely holds up, even if its gameplay may not be all that different from the 2018 Spider-Man game.

In case you’re unfamiliar, Miles Morales is sort of a sequel to the 2018 Spider-Man game as its story set after the game’s events. Though this isn’t a true sequel as instead of controlling Peter Parker, you get to play as Miles Morales.

The game’s story sees Miles on his own as Peter goes away for a bit. This proves to not be the best timing given that Miles is new to the whole Spider-Man thing, not to mention that a new villainous group is on the loose.

I won’t go into too much detail regarding the game’s story, but what I can say is that it has a satisfying narrative that won’t disappoint. Sure, it may not land as strongly as the first game, it’s still very much a great story that fans of the first game will definitely enjoy.

Take note though, the game is shorter than the first game. In fact, you can probably finish the game’s story in around 8-10 hours. While not bad, that’s not as long as the first game, so you may want to keep your expectations in check. Still, if you’re a completionist, you’ll get way more than 10 hours with the game’s numerous collectibles and side missions.

For gameplay, Miles Morales plays almost exactly the same as the original, though there are some differences. Miles has fewer suit powers, but he does have “Venom Powers” (which are what he calls his bioelectric powers) as well as the ability to go invisible. These add a nice twist to the gameplay, but not enough to fully transform it.

Still, even if you just finished the first Spider-Man game from Insomniac, you will still enjoy this and not get tired of it. It probably helps that even in the standard difficulty, the game feels more challenging. This is because there are more enemies with armor, so you need to take full advantage of Miles’ various unique abilities. 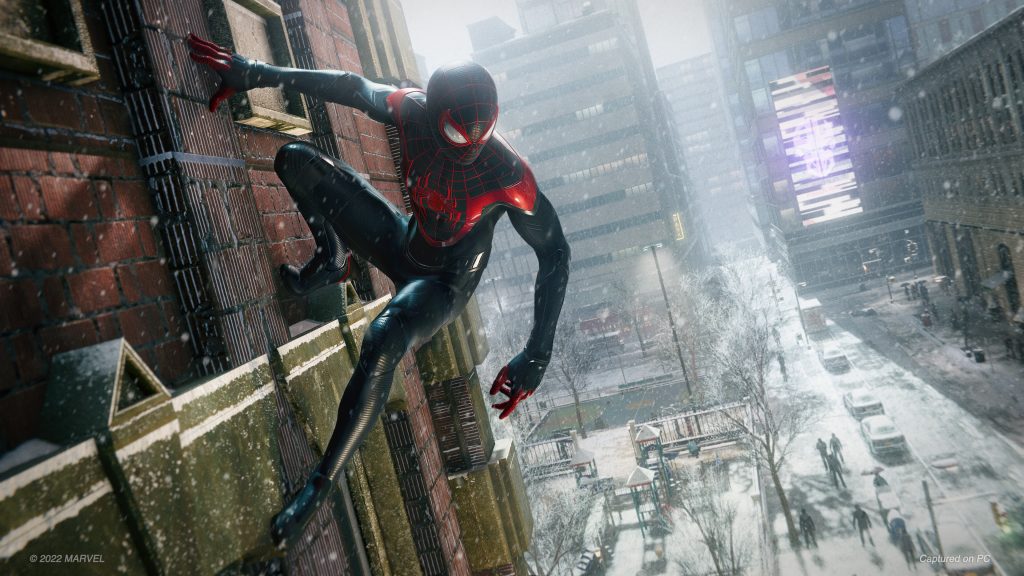 Overall, Marvel’s Spider-Man: Miles Morales is well worth playing if you finished and enjoyed the 2018 Spider-Man game. Thanks to the various PC-related enhancements, it’s fair to say that this is the definitive version of Miles Morales if you have the PC that can run it at 4K and at higher framerates.

Take note though, you may run into some issues with running the game on older hardware. But again, that might be an isolated incident.

Also, if you’ve already played Miles Morales, the PC version is a definite improvement over the PS4 version, but it’s still the same game. So you may want to wait for a sale in case you want to double-dip.

This game was reviewed using a PC game code provided by the publisher.

While it's not much different from Spider-Man Remastered, Miles Morales introduces enough new additions that make it fun to play through. It also helps that its story is good and its PC performance should also be good for most users. Marvel’s Spider-Man: Miles Morales Review (PC) | Well Worth Playing